Information on the MFA 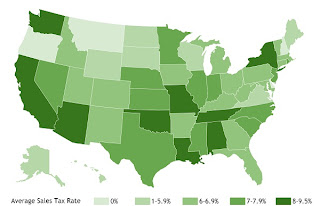 What is the MFA?

The Marketplace Fairness Act, formally known as H.R. 5660, is a bill before the United States Congress which would "promote simplification and fairness in the administration and collection of sales and use taxes, and for other purposes." Proponents say that it will create billions of dollars in sales tax revenue to local communities without raising taxes or creating a new tax. Specifically, the Main Street Fairness Act would allow state governments to require large out-of-state retailers to collect and remit sales tax on purchases shipped to those residents of those states.

Here are some useful sources of information on the MFA:

Here is a video from CNN on the MFA

Online sales grows by about 15% per year.  As such, online sales are becoming an ever-more important source of revenue for states. The states will inevitably have to force online retailers to collect sales tax.  As of September 2012, all Pennsylvania online retailers will be required to collect tax, and other states, such as California are also implementing similar rules. Failure of a merchant to pay these amounts could be deemed a crime for failure to collect and remit sales tax.

The MFA has generated a lot of debate amongst retailers, consumers and politicians. Here is a sample of some of the opinions in these debates.

FOR the Marketplace Fairness Act


AGAINST the Marketplace Fairness Act

State law and potentially Federal law, provides for the operation of intermediaries that inform merchants of the applicable tax to an individual transaction, based on the location of the seller, location of purchaser, type of goods and purchase price. These intermediaries also have the right to participate in the collection of the state taxes and the remittances of those taxes to states.  In exchange for providing these serves for the benefit of states, the intermediaries are paid a portion of the taxes collected. In this sense, states have placed a bounty on tax dollars to be collected.

A number of states have formed the Streamlined Sales Tax Governing Board, Inc., to simplify the collection of state sales tax which also dovetails with the MFA.

The National Conference of State Legislatures has also tackled the issue of the MFA.

The MFA has implications throughout the payments industry as states, banks, processors, gateways, shopping carts, ISOs, agents and merchants allocate responsibility for the following key issues:

This site is powered by GoogleApps.

Adam Atlas Attorney at Law studies these issues and would be pleased to discuss them with you. Atlas also publishes the following: